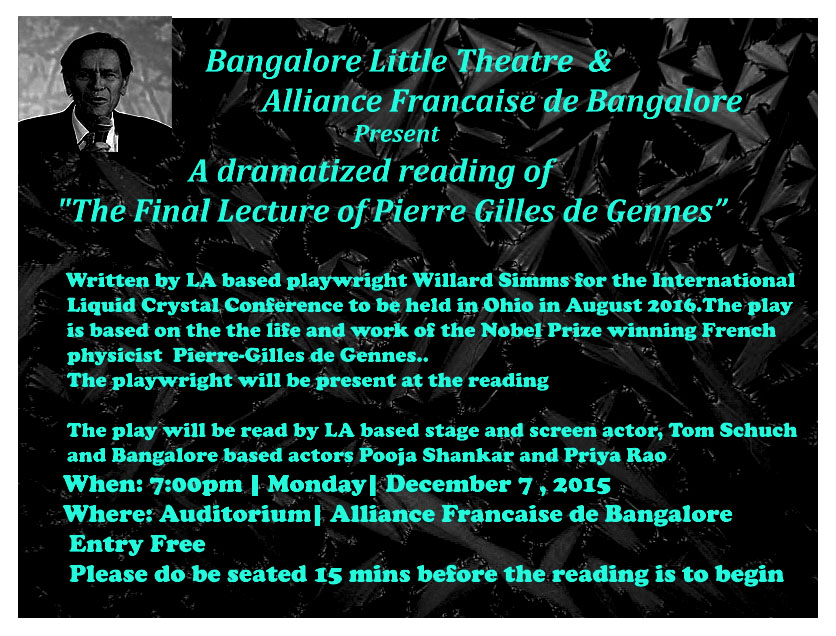 Bangalore Little Theatre & Alliance Francaise de Bangalore present A ​​dramatized reading​ ​of “The Final Lecture of Pierre Gilles de Gennes”.Written by LA based playwright Willard Simms for the International Liquid Crystal Conference to be held in Ohio in August 2016.The play is based on the the life and work of the Nobel Prize winning French physicist Pierre-Gilles de Gennes.. The playwright will be present at the reading .

The play will be read by LA based stage and screen actor, Tom Schuch and Bangalore based actors Pooja Shankar and Priya Rao.

It is more than 10 years since the death of the Nobel Prize winning physicist – Dr. Pierre-Gilles de Gennes. Although he was best known for his work with liquid crystals, he was also world renowned for his brilliant lectures in physics.  Somehow, through an Einsteinian bending of space and time, he has returned to earth to again deliver lectures.  The only catch is that he has to include details about his personal life, something he hated doing.  For this particular lecture, a reporter from a magazine known for specializing in scandal, has been assigned to interview about his personal life, and especially about the fact he had two simultaneous families, complete with Dr. de Gennes.  He refuses to be interviewed and tries to ignore the reporter.  However, she interrupts his lecture with questions children by two different women.  The result is the dramatic collision of a fascinating combination of scientific truths and little known personal truths reenacted onstage by the two actors.  By the end of the play, Dr. de Gennes is forced to decide if he wants to continue with these lectures, since they must always retain this same format!

“The play explores the differences between the 20th century idealism of a dedicated scientific genius who made the pursuit of important discoveries in physics the focal point of his life… He is confronted with a beautiful young 21st century opportunist, whose goal is to emphasize whatever scandalous information might be most interesting to a jaded public that is more interested in voyeurism than the pursuit of truth. The audience is left to decide – in the battle between a dedicated man of science and a relentless reporter intent on appealing to the baser, but very marketable, curiosity of humanity – where should our sympathies lie?”