Socrates on Trial is a play depicting the life and death of the ancient Greek philosopher Socrates. It tells the story of how Socrates was put on trial for corrupting the youth of Athens and for failing to honour the city’s gods. The play contains adaptations of several classic Greek works: the slapstick comedy, Clouds, written by Aristophanes and first performed in 423 BCE; the dramatic monologue, Apology, written by Plato to record the defence speech Socrates gave at his trial; and Plato’s Crito and Phaedo, two dialogues describing the events leading to Socrates’ execution in 399 BCE. The play was written by Andrew David Irvine of the University of British Columbia 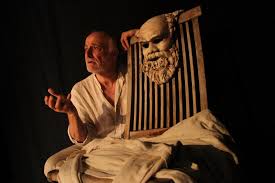