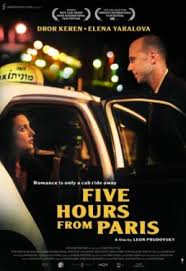 Synopsis Only 5 flight hours from Paris, in a working-class suburb of Tel Aviv, two people meet. He is a bred-and-born Israeli and she is a Russian immigrant. He is a taxi driver and she is a music teacher. He has no aspirations. She gave up hers long ago. He is afraid of flying and she is about to fly away. What are the odds of them ending up together? It premiered as an official selection at the Toronto International Film Festival on 12 September 2009. A French cinema chain caused controversy when they cancelled its release following the Gaza flotilla raid and instead screened a French documentary about Rachel Corrie, an American protestor killed by an Israeli bulldozer in 2004.
Original Language: Hebrew
Subtitles: English