Alliance française de Bangalore, in collaboration with Attakkalari, is happy to present “Buddha”, an Indo-French collaborative creation in contemporary dance, a crossover attempt of Indian & European movement art with subtle influences from the mystical approach from Chi-gung, the chinese martial art.

“BUDDHA THE WHY WITHIN” is a transcendental journey of love, hate, deception, aspiration and desolation. The story, reverberates, the voices of some unsung characters, of MAHABHARATA, which seldom, surfaces in the glory of the epic, but has a huge impact, in the soulful realization of oneself in the epic as well as in the society. The Rhythmosaic team – led by Ronnie Shambik Ghosh and Dr Mitul Sengupta, along with two leading dancers from Off Jazz and France present Buddha: The ‘Why’ Within. 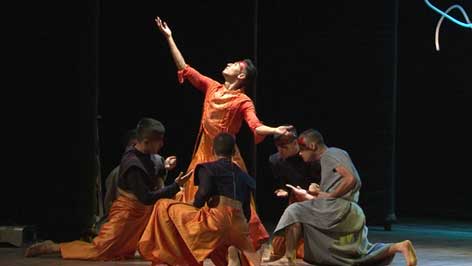 The project, is not celebrating the righteousness of religion or the eight fold path, which the philosophy of “BUDDHA” often is referred, but it traces a soulful and a powerful journey of one’s belief to what religion really is and where it takes, at the end of this journey, that is the realization, and its approach to oneself and the world.

The story here dwells mainly with three characters from the epic Mahabharata, where it is carefully chosen by keeping in mind, their glory, their episodes in the epic, and overall their karma, which reflects in an out through time in the present generation, and the ancient epic.

The performance will showcase characters like ARJUNA, ULUPI, ARAVAN and BARBAREEK, where one has larger than life imposition, in the society, so as in the great epic “MAHABHARATA”. The story from ‘MAHABHARATA’ does not stay within the black line of hard bounded heavy book covers, but echoes violently, loud and clear as voices from life and society.

In our modern day lives, we encounter characters, like ARJUN, ULUPI and ARAVAN, where ARJUN is the epitome of heroism and bravery, shrouded with the dark shadows, of trickery and selfishness, ULUPI- the neglected one and ARAVAN – the destiny’s child and the desolate one, all of them and every one of us are ravaged with hunger of warn, greed, lust, selfishness and trickery. All of us are running a never ending run, a never ending quest.

But are we realizing the true realization, the true quest within, the search of ‘WHY’ – the search of ‘BODH’, the ultimate realization the ‘BUDDHA’. It is not a religion, it is more than a religion. It is a pathway of eternal conflict and resolution, where no one wins or looses, where we discover everyday beyond, ones, cast, creed and religion. It rattles us with questions of one’s true identity to oneself, a true search of ‘WHY’ a true quest for ‘WHY WITHIN’, the ‘BUDDHA in oneself’. And BARBAREEK in the story of this version of ‘MAHABHARATA’ is the consciousness, the void, the unidentified, the indestructible- ‘WHO SEES IT ALL’.

The project “BUDDHA THE WHY WITHIN” is an unusual and exciting journey for all three of us. While creating this work, we encountered many differences, conflicts and opinions between us and as well as around us. As it is an INDO-FRENCH production and dealing with “BUDDHA’ which is a global religion was not easy for us. But working on it, we realized deeply that BUDDHA is not only religion. It is more of knowing oneself, through deep introspection of one’s true identity and one’s duties in life and society. It is truly a search within and the quest for “WHY WITHIN”. “BUDDHA – THE WHY WITHIN” on stage is a crossover attempt of INDIAN and EUROPEAN MOVEMENT ART, with subtle influences from the mystical approach of CHI-GUNG the Chinese Martial Art, (the life energy cultivation- the essence of BUDDHA). We wish the piece will stimulate the way it is meant to be.