The Alliance française de Bangalore and the Bangalore School of Music invite you to an enchanting evening of dance and music – From Classical Music to Flamenco with Serge Lopez and Nathalie Marin.

Serge Lopez and Nathalie Marin met during a concert with the Symphony Orchestra of Cannes: they both wished to combine their respective music – flamenco and classical music. The colors and the very particular sound of flamenco guitar serve to the sensual music of Debussy, Ravel or Massenet fascinated by Spain and Andalusia. Serge Lopez also interprets compositions of his own repertoire, inspired from jazz and flamenco. 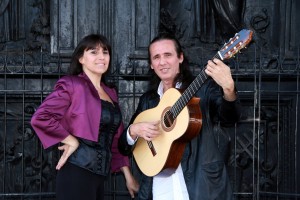 They recorded a cd “Danzas sinfonicas” with the National Symphony Orchestra of Ecuador which will be on sale from January 2015.

Praise for the duo:

“Words could not express with enough power all the emotion, all the poetry which arise from the guitar and voices. Maturity is undeniable, delightful.” – Sur les rails

“Serge Lopez has the gift to switch from one atmosphere to another, while keeping a continuous unity which captures our attention from beginning to end. A great maturity.” – Antoine Drapeaux, Guitar & bass

“Sumptuous arabesques composed and interpreted with care and lightness by an inspired and virtuoso trio, gifted of a bright harmony…” – Voxx 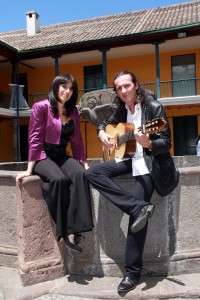 Serge LOPEZ: Born in Casablanca (Morocco) Serge Lopez grewup in Toulouse (Southern France) and lived in Andalusia forseveral years. The crossing of his origins have inspired him and brought to his work shades and perfumes from the Mediterranean. From this cultural melting pot, he has developed tolerance and open‐mindedness, which we can hear in his music where several universes are mixed to become one. Serge Lopez has worked for a long time with Bernardo Sandoval, and participated in many of his albums (including the original soundtrack of the movie “Western”, awarded in Cannes). His projects led him to collaborate with the Brazilian musician Rio Renato de Resende, the French singer Francis Cabrel (« Des roses et des orties», 2008), or the French artist Stéphane Mondino («Roll Over», 2007). Besides, he was a member of “Origines contrôlées” (aside‐project created by the singers Mouss & Hakim). With his own trio, accompanied by Jacky Grandjean, bass player and Pascal Rollando percussionist, he played on tour in Canada, U.S.A, Croatia, Belgium, Germany, New Caledonia, in the jazz and flamenco festivals in France, as well as in Hanoi, Moscow. In September 2010, he performed for the first time under the baton of Nathalie Marin, alongside Nilda Fernandez, with the Symphony Orchestra of Cannes. In March 2011, he interpreted the adaptation for guitar and strings of Claude Debussyʹs Dances with the Albanian Orchestra of Radio Television in Tirana, and played other concerts with the ENORIS Orchestra. He played several times with the National Symphony Orchestra of Ecuador (2012/2013). In 2013 he is invited by the National Symphony Orchestra of Cuba, by the Symphony Orchestra of Guayaquil (Ecuador). He has recorded eight cd on his own name. The last one “Danzas sinfonicas” has been recorded in Quito with the National Symphony Orchestra of Ecuador conducted by Nathalie Marin.