Trailblazer. Screen-scorcher. Essayer of powerful roles. Padma Shri and national award recipient who mesmerised the world in a short but brilliant career.

Say ‘Smita Patil’ and there is that special glint in the eye of movie enthusiasts who had the privilege of watching this charismatic actor on screen. Whether it was Bhumika, Manthan, Gaman, Arth or Mirch Masala, movie after movie Smita breathed magic into every role, transforming effortlessly into the character she played on screen. Achiever and performer extraordinaire, Smita would have been 60 if she were alive today.

Join us, a group of Bangaloreans, as we celebrate her life and cinema by screening nine of her movies across different languages, including Marathi, Tamil and Malayalam besides, of course, Hindi. All this over three days, beginning on the Kannada Ugadi habba and Maharashtrian Gudi Padwa festival, at the stately National Gallery of Modern Art (NGMA) in Bengaluru. 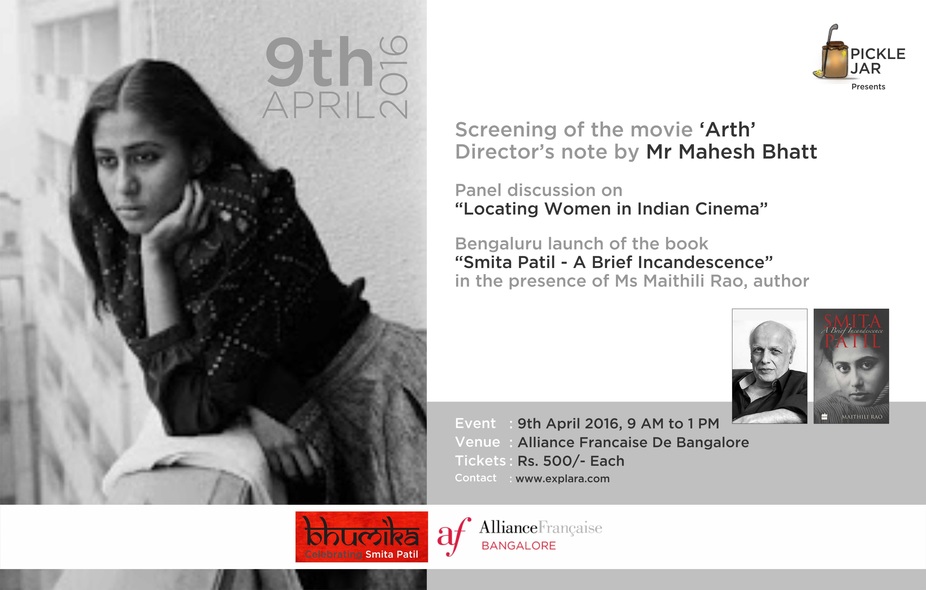 Renowned director Shyam Benegal, who drew out some of the finest facets of Smita the actor, has agreed to open ‘Bhumika’, the Smita Patil film festival, named after his own film. Mahesh Bhatt, whose Arth brought together two of India’s finest female actors, will be the guest of honour.

While the movies promise to be a treat for cine buffs, a collection of rare photographs featuring Smita as well as those shot by Smita will be on display at NGMA.

In tandem, at Alliance Francaise, the Bengaluru launch of the actor’s biography Smita Patil: A Brief Incandescence will take place in the presence of author Maithili Rao. We also wish to use the community-funded film festival as a forum to talk about two crucial issues that Indian cinema faces today: ‘Whither Parallel Cinema?’ and ‘Locating Women in Mainstream Indian Cinema’.

The festival will give us the perfect opportunity to hear both seasoned and fresh voices from the Hindi and Kannada cinema industry who are acting, directing, scripting, producing and collaborating on some sparkling work. This will be our tribute to what Smita so uniquely epitomised in her time – a new language of cinema which was also redefining and recasting the role of the woman, both on the screen and behind. Her Bhumika.