The Animation Film Festival aims to sensitize the public and the media to the “image by image” cinema and thus contribute to the promotion of films and their creators.

Its genesis and implementation are organised along with the World Animation Films Day, celebrated on October 28th as a tribute to Émile Reynaud, a pioneer of the “frame by frame” film and to commemorate the first public screening of animated bands in Paris at the Musée Grevin, precisely on the day of October 28, 1892.

The event takes place every year simultaneously in a hundred cities of France, and in the cultural network overseas. It involves more than 200 cultural sites, organizing more than 500 events, in 30 different countries. 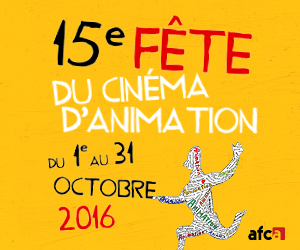 The Festival is part of a dynamic partnership with cultural and educational actors which, by their choices and involvement, contribute to make this celebration a highpoint, unique in the world of the animated films. This action is conducted and developed nationally by the AFCA with the support and collaboration of various public and private partners.

The Institut Français joins the AFCA to extend the Festival abroad in October 2016. On this occasion, the international French cultural network and its partners are invited to program animated films as part of public screenings, debates, and meetings.

Please find below the programming at the Alliance française de Bangalore: