BOOK LAUNCH: The Politics of Hindi cinema in the New Millennium

BOOK LAUNCH: The Politics of Hindi cinema in the New Millennium

The Alliance française invites you to the launch of the book “The Politics of Hindi cinema in the New Millennium”, written by M. K. Raghavendra. The book will be launched by Mr. Chiranjiv Singh, President of Alliance française de Bangalore.

The author will be in conversation with Mr. Singh and Mr. Akumal Ramchander (writer).

Popular Hindi cinema metamorphosed unrecognizably in the new millennium. An expanding urban middle-class viewer base, ever growing in its Anglophone cultural absorption, fuelled the multiplex boom at home. A slew of popular movies in tune with the sensitivities of the diasporic Indians came to define ‘Bollywood’ as a powerful global brand and a lifestyle banner. Another kind of mainstream cinema emerged in opposition to the dominant ‘elitist’ presence, a cinema meant less for multiplexes but still not ‘traditional’ in the old way. The Hindi film industry itself changed radically post 1990s, and so did the meanings, mores, and ideologies embedded in Hindi cinema.

Going beyond the conventional theory-laden mode of analyzing the political moorings of mainstream cinema, M. K. Raghavendra accords primacy to their ‘text’, treating them as rich reflections of the goings on in contemporary society. Taking cinema and cinema-viewing as a conjoined site of enquiry, he brings together a revealing and enlightening analysis of 28 blockbusters from the 2000s. With a close reading of films such as Rang De Basanti, Veer-Zaara, Bunty aur Babli, 3 Idiots, Dabangg, Rajneeti, and Zindagi Na Milegi Dobara,Raghavendra untangles the threads of myriad new imaginaries of contemporary India and Indian-ness, embedded in a transformed Bollywood.

M.K.Raghavendra is an eminent film critic and researcher and has been the recipient of the National Award for the Best Film Critic, the Swarna Kamal, in 1997. Some of his most prominent publications include Seduced by the Familiar: Narration and Meaning in Indian Popular Cinema (OUP 2008) and Bipolar Identity: Region, Nation and the Kannada Language Film (OUP 2011). 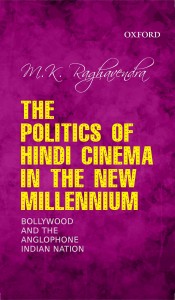