BOOK LAUNCH: Off the Record

BOOK LAUNCH: Off the Record – Untold Stories from a reporter’s diary 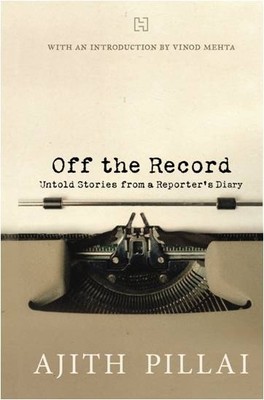 In a journalist’s career, the best stories can seldom be published. Veteran journalist Ajith Pillai’s colourful career spanning nearly three decades has taken him from the murky underworld of Bombay to the icy heights of Kargil, yet, the stories he has written are only half the story. Now, for the first time, the ‘off-the-record’ stories that never found their way to print are presented in this witty and engaging memoir. Beginning with a call from a furious Chota Shakeel, Dawood Ibrahim’s right-hand man, asking him to retract a story on ‘Bhai’ or face the consequence, Ajith takes the reader on a journey that sees him guide V. S. Naipaul to meet ‘boys’ from the underworld, follow the sensuous Silk Smitha around the city on a New Year’s eve, witness the first shots of operation Vijay during the Kargil war, track, along with a colleague, a brigadier accused of high treason across the country, come across embarrassed congressmen in Kamathipura, Bombay’s red-light district, discover who was pulling the strings during Vajpayee’s tenure and finally, coordinate the coverage of the multi-million dollar scorpene submarine scam and the sensational Radio tapes. Written in his trademark wry style, with real stories more entertaining than fiction, off the record is a testament to a journalist’s life, as well as a comment on the changing nature of the effervescent Indian media.

About the Author
Ajith Pillai has been a journalist for 28 years. He has reported out of Bombay, Chennai, Delhi, Bihar, Andhra Pradesh and Kashmir on a wide range of events related to politics, crime, conflict and social change for some of India’s leading publications – the Sunday Observer, the Indian Post, the Week, the Pioneer and India Today. Part of the team that launched Outlook magazine, he left its services as Senior Editor to branch out on his own in 2012.