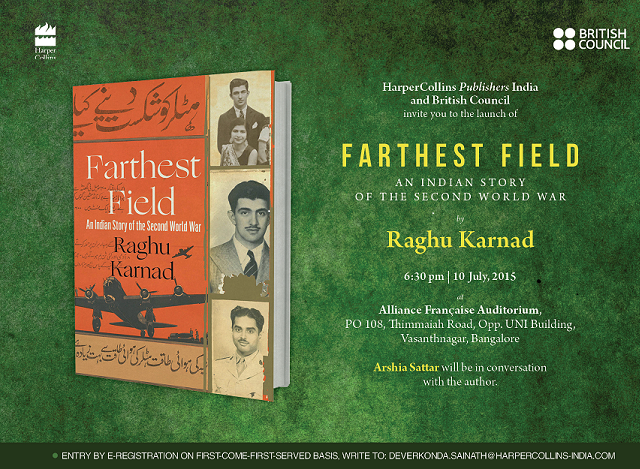 About the book – The years 1939–45 might be the most revered, deplored and replayed in modern history. Yet India’s extraordinary role has been concealed, from itself and from the world. In riveting prose, Karnad retrieves the story of a single family – a story of love, rebellion, loyalty and uncertainty – and with it, the greater revelation that is India’s Second World War.

Farthest Field narrates the lost epic of India’s war, in which the largest volunteer army in history fought for the British Empire, even as its countrymen fought to be free of it. It carries us from Madras to Peshawar, Egypt to Burma – unfolding the saga of a young family amazed by their swiftly changing world, and swept up in its violence.

About the author – Raghu Karnad was born in Mumbai in 1983, and studied political science at Swarthmore College, PA, and at Oxford, where he took a first. In New Delhi, he worked for two national newsweeklies, Outlook and Tehelka, writing articles that won many prizes including the European Commission’s Lorenzo Natali Award, the Every Human Has Rights Award, and the Press Institute of India Prize for Reporting on Conflict. He was editor of Time Out Delhi until 2011. He has also written freelance for the Financial Times in London, the journal n+1 in New York, the Caravan in New Delhi, and other publications.