BELLYDANCE RHAPSODY, is an attempt at bringing Latin and Bellydance in its purest form to Bangalore, grooving to the tunes from Turkey, Egypt, Lebanon and Spain.

Anubis Nirvana Latin & Bellydance, have worked very hard to make the event bigger and better with dancers from all levels – beginners, intermediate, advance or professional.

The show’s authenticity would surely leave you in awe – be it the accessories, props, costumes, music or dance forms. 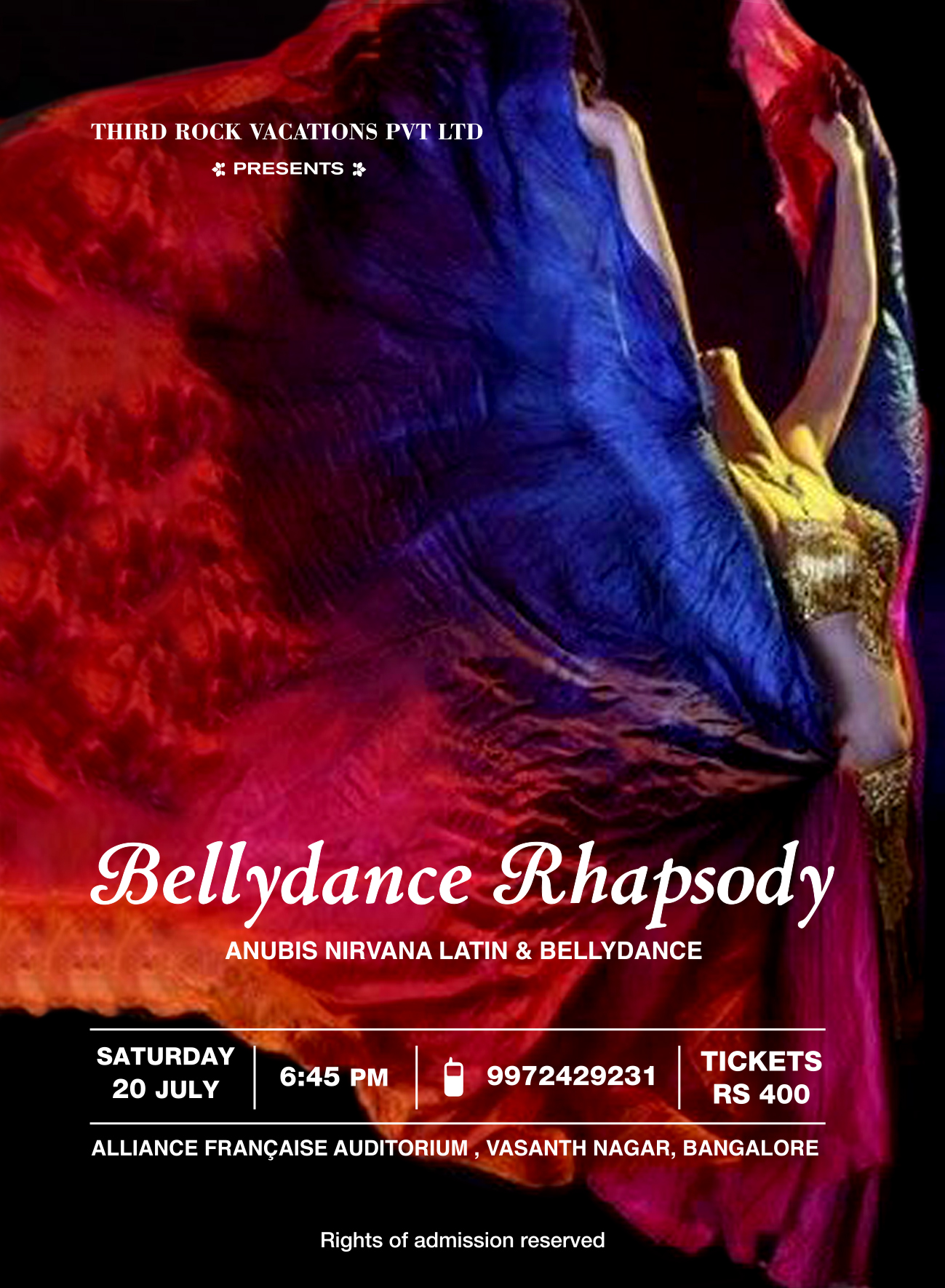 About the Artistic Director

“Amazing,” “Mesmerising,” “First-Class,” “Perfection, ” “a Queen” are among the international press and specialised critics descriptions of her Art.

Her passion for the Art of Dance was engendered in a familiar artistic environment at an early age, dedicating her life to the globalisation of this Art ever since.

The career of Anubis Nirvana began on stage at the age of 7 in her native country Venezuela. Anubis’s formal dance foundation initiated with jazz, rumba, flamenco, salsa, merengue, cumbia, bachata and tap, in Caracas, under the leadership of Mercedes Quintero Dance School.

She founded 3 dance schools in Caracas, Muscat and Bangalore:

1. CARACAS, Venezuela: “ANUBIS NIRVANA Danza Arabe “in 2005, She spent time training dancers and producing a myriad of events ranging from TV (PORTADAS, CHANEL 4), radio ( 101.1 FM), theatre shows (Teatro Don Bosco and C.E.A) and outdoor festivals (International Dance Day by UNESCO and Ultimas Noticias Newspaper Anniversary). She is very proud that her dance school in Venezuela was the first one to introduce Bollywood dance style; this achievement was even recognised by the TV channel Venevision, which broadcast many times our dance performance.

2. MUSCAT, Oman: “ANUBIS NIRVANA Latin & Bellydance ” since 2008, where she has students from different countries, also many interviews with local newspapers and magazines like: Times of Oman, Hi, The Week, “Y”, The Observer, Muscat Daily, Mar’a, Faces, Thursday, Oman Tribune. She created 3 different Latin Dance workshops for the summer camps at the Catholic Church in Muscat from June and July 2008-2009-2010. In March 26th 2009, Anubis and her students participated in a charity event, where the Royal Family from Oman was present: Dance Muscat Dance 2009, we delight the audience with different performances: Rumba Flamanca from Spain, Egyptian Bellydance, Bomba from Puerto Rico and Drums from Venezuela.

Anubis Nirvana’s global trajectory has captured the admiration of other remarkable artists in various artistic realms. In December 2010, she travelled to Caracas to be part of an International Dance Festival, where she taught Omani Folk dance, she had the pleasure of sharing the stage with Master Mahmoud Reda (founder of the famous REDA TROUP from Egypt). In 2013-2014, she were invited by the Venezuelan Embassy in Delhi to perform and to give a speech about Venezuelan Folk Dances, organised by the Embassy of Spain, and many others to promote Venezuelan culture in India. Since 2017 she is the official Spanish translator for Master Farida Fahmy (Egypt).