The year is 1964. With Tokyo preparing to host the Olympics, buildings and highways are being constructed at a feverish pace, and excitement fills the air. Amidst all the change and commotion, the people of Third Street continue to carry on with their lives, as colorful and vibrant as ever.
The novelist Ryunosuke Chagawa (Hidetaka Yoshioka) has married Hiromi (Koyuki), and the two now share a happy life with Junnosuke (Kenta Suga), the young boy he had taken in during the first film, who is now in high school. Chagawa’s candy shop has been renovated to include a small restaurant, which Hiromi runs. Hiromi is also pregnant, and the family prepares to welcome a new addition to their household. Chagawa continues to write his serial as the lead writer on the Adventure Boys Book magazine, but his popularity is threatened by a new writer. Asked by the editor, Tomioka (Nao Omori), to “give it a fresh new feel,” Chagawa begins to sink into a rut.
Meanwhile, Norifumi Suzuki (Shinichi Tsutsumi), his wife Tomoe (Hiroko Yakushimaru), their only son Ippei (Kazuki Koshimizu) and their live-in employee Mutsuko Hoshino (Maki Horikita) have gradually expanded their auto repair business, which has gotten an impressive makeover. Mutsuko now manages a new employee, and she has grown into an indispensible part of Suzuki Auto. But every morning, Mutsuko puts on makeup and steps out of her home — all so she can “happen to” run into and say hello to the young doctor, Kotaro Kikuchi (Mirai Moriyama), who passes by on his way to work. Kin Ohta (Masako Motai) watches over Mutsuko’s burgeoning romance with maternal warmth, while the pediatrician, Shiro Takuma (Tomokazu Miura), continues to treat the townspeople.
One day, Hiromi discovers a telegram that Chagawa had hidden. Who sent this telegram? What is the surprising identity of this new, rival writer? Will Mutsuko’s affections be returned? And what future awaits the people of Third Street? 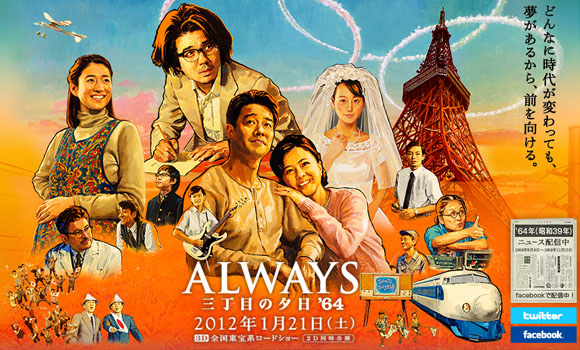