The Consulate General of Israel brings you the 2nd edition of the Israeli Film Festival in Bengaluru.

The Consulate General of Israel announces nine Israeli films that will entertain movie buffs for the second consecutive year in Bengaluru. The Israeli Film Festival will be held in the city from August 14 to August 27, 2015. The films will be screened at Alliance Française, Bangalore International Center and Suchitra Film Society. This year we are introducing the Israeli Film Festival in Mysuru in association with Mysore Film Society.
All films at the festival are in Hebrew with English subtitles.

The opening movie is an award winning movie with a Bollywood twist ‘Desperado Square’ (2001) and is directed and written by Benny Toraty. The film revolves around the revival of a long disused cinema with a showing of Sangam (a successful and famous Hindi film from 1964). The plot of ‘Desperado Square’ both parallels and serves as a tribute to Sangam. Set in ha-Argazim, a neighborhood that time forgot. Another film that will be showcased this year is a2011 film ‘2 Night’a fast paced film about two people unable to find parking in Tel Aviv with a beautiful view of the city in the backdrop.A 2012 movie, ‘The World is Funny’ is about simple people struggle through extraordinary circumstances. Sometimes the only answer to any problem is the world is funny so we have to laugh. The other films include ‘Frozen Days’(2005), ‘My Lovely Sister’(2011), ‘Nymphs in the Mist’(2007), ‘Out of Sight’(2006), ‘Restoration’(2011), and ‘Things behind the Sun’(2006).

The entry is free for all the screenings (except 13th Aug). Through these Israeli movies you can experience Israeli society, technology and creativity. You can also familiarize with the developments the 67-year-old country has undergone ever since independence from the British rule—similar to India’s story. This festival is only one step in showcasing the varieties and similarities of traditions and cultures between India and Israel.

On the 13th of August, the movie Desesperado Square will be screened.

In ha-Argazim, a neighborhood that time forgot, the one-year anniversary of Morris Mandabon’s death is 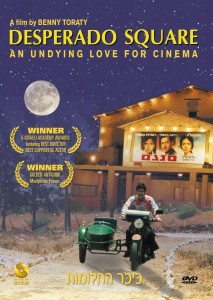 approaching, and his youngest son, Nissim has had a dream in which his father orders him to re-open the old neighborhood movie theater, thus breaking the vow that Morris had made years before never to screen movies again. Nissim and his brother George, together with Aharon Gabardine, who was the projectionist back in the old days, are determined to fulfill Morris’ request. The same day Nissim has his dream, Avram Mandabon, Morris’ brother, returns for his brother’s memorial after a 25-year absence. His reappearance causes old family feuds to resurface. Seniora Mandabon, late Morris’ wife, won’t even speak to Avram. Following the advice of Yisrael “the Indian”, considered the neighborhood authority on films, the brothers decide to screen the Indian-made local hit from years before, “Sangam”, to which Seniora objects (“Nobody cares to watch old Indian movies!”) and tries to convince them to screen another movie, but they insist. They eventually find out that the only print of “Sangam” is in the hands of Avram, their uncle, who refuses to give it to them. And so, as the time for Morris’ memorial approaches, as well as the screening date, it seems that a clash is inevitable. In the tense days that follow, the past resurfaces and the brothers learn the secrets of their family history and the real reason why their father closed down the theatre.

Schedule for the Alliance française – FREE ENTRY (click to enlarge) 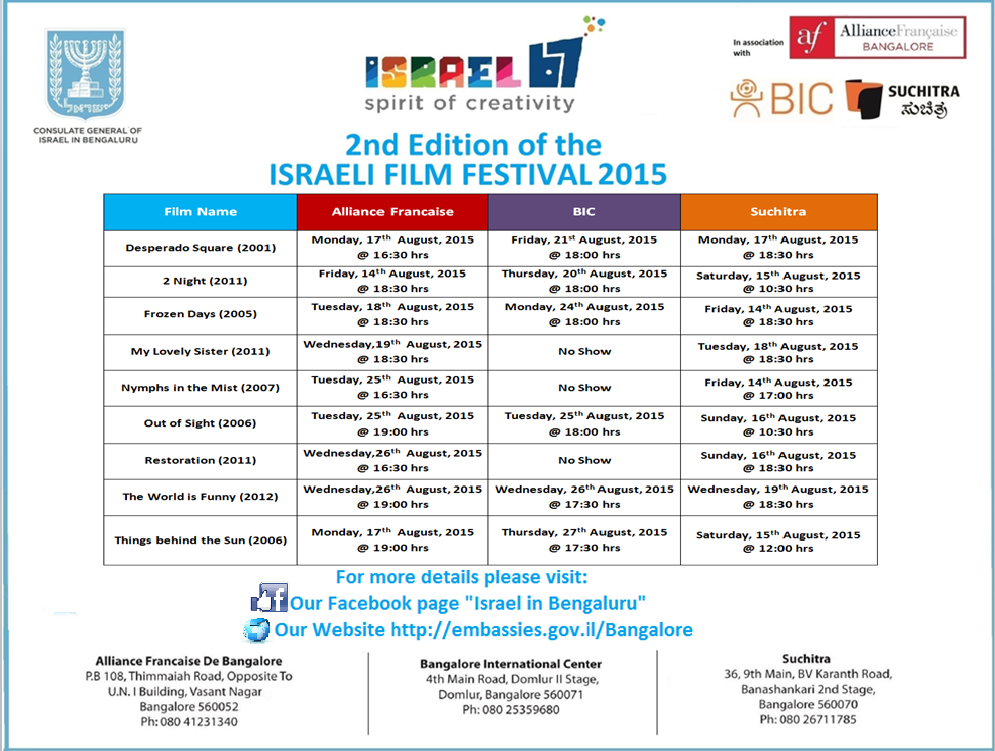